You are here: Home / News / A juicy harvest at Newton Primary School 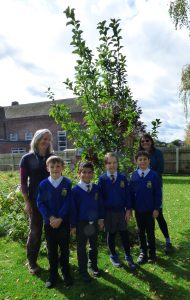 Year 4 children from the school’s Gardening Club spent a happy lunchtime learning how to operate the press and produce their very own freshly pressed juice.

The apples used were a mixture picked from the school’s own trees together with others brought in by some children from their homes.

The school’s trees were first planted in 2008 as part of a Chester-wide project led by Transition Chester to encourage an appreciation of locally produced food and to help reduce waste by the   purchase an apple press and associated equipment. Transition Chester is a community group formed to support local actions tackling and minimising contributions to climate change from human activity.

“We were so pleased that Newton Primary School approached us to borrow our apple pressing equipment. The school was one of a small number of schools in Chester that had benefited from our Apple Project almost 10 years ago.

The apple project was funded by the Cheshire Community Action Fund to enable the purchase of the press, the funding of  free training workshops in tree grafting and the purchase and distribution of apple tree saplings which were  planted at a number of Chester schools, including Newton Primary School.

The trees planted at that time are all now beginning to bear fruit and it was particularly fitting that our equipment this year was used to transform the fruit from those trees and provide the children’s first experience of delicious freshly pressed local juice.

“Almost a decade ago, when the Year Four Gardening Club was still in its infancy, we were very pleased to receive a donation of three apple trees from Transition Chester.

In the following years, the Gardening Club has grown and flourished along with the trees, which this year were laden with fruit. As the crop was so heavy, Bridget Zorn, who manages the club with help from volunteers Les and Helen, decided that it would be an ideal opportunity to make apple juice from the excess and fallen fruit.

She arranged to borrow the apple press from Transition Chester, and Simon Brown from the group was keen to come along and help make juice from the apples which had grown on the trees which they had donated so many years before.

The Year Four gardening club children were the first to have a go at chopping, mashing and pressing the fruit and they all took some of the delicious fresh juice away with them. After school, the experience was opened-up to all the parents and children…..”

Debbie Lee, a teacher who is the school’s Environment Coordinator and organised the special day added:

“We thought a couple of people might come along, but it was hugely popular and an enormous success – we think we made about 40 pints of juice!”

“We, as a school, have a strong engagement in environmental issues and are actively responding to the Climate Emergency declared by Cheshire West & Chester Council. The council is currently engaging with communities to give them opportunities to share their views and ideas on how they can reduce carbon and other greenhouse gas emissions across energy, water, air, land, food and waste, and adapt our communities to be more resilient to the impact of climate change.

As an example amongst various other initiatives we, as a school, will this year be implementing changes alongside our catering company, Edsential, to reduce our impact on the environment.

Edsential actions have included –Toast now being served directly from trays, without paper bags; yogurt pots removed from supply with it now being served in glass bowls and plastic straws have been removed completely.”

Transition Chester makes their apple pressing equipment available to Individuals, Schools and Community Groups via an online booking system on their website www.transitionchester.org.uk . This is able to reserve the equipment to be on loan for a small charge.

In addition, the group also uses the equipment to run a number of free Community Apple Pressing events for the general public held in various local centres around Chester. The last one of this season is being held on Edgar’s Field, Handbridge on Saturday 26th October from 10am until 3pm. The event is being held in partnership with local Handbridge business ‘Exsqueeze Me’.

Members of the public are invited to bring their own apples and containers and turn them into juice which they then can take away.﻿ 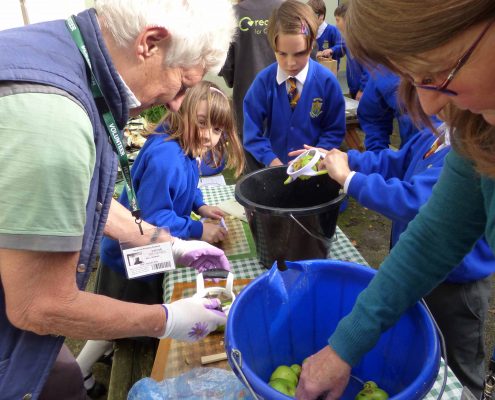 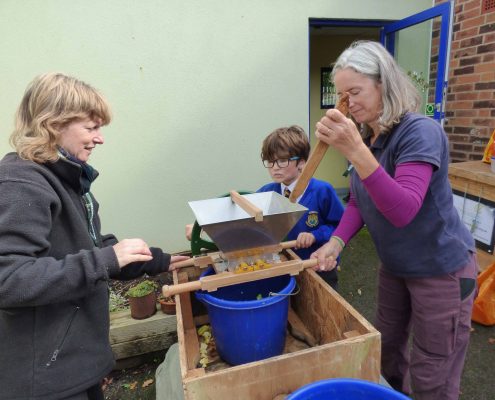 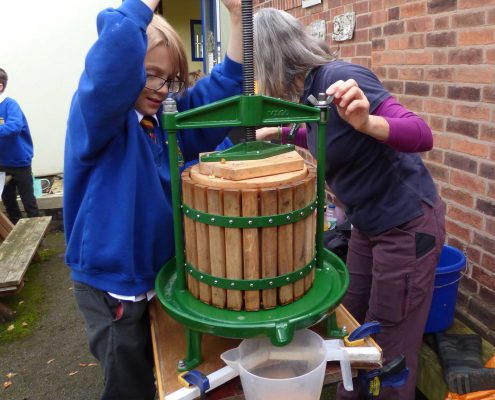 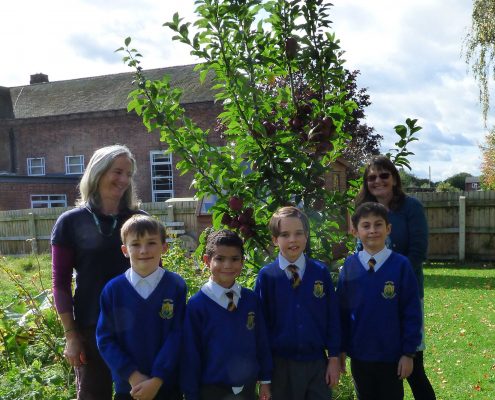